Apple’s AirTag tracking device has garnered a bit of negative attention since its release as privacy and safety concerns have arisen. The device is intended to be attached to personal belongings that are liable to be lost, so that their rightful owners may find them again. Apple claims that it has received written accounts of “countless” stories of AirTags helping users recover lost items.

However, not long after Apple first introduced the AirTag, fears arose of the trackers being used for stalking or other nefarious behavior. AirTags are quite affordable at just $29, and Apple’s Find My network is a billion devices strong, making AirTags a cheap and easy tracking solution, whether for good or ill purposes.

Stories of people finding AirTags attached to their cars, whether intended for stalking or car theft, and AirTags sold on Etsy with the speakers removed have gone viral, prompting Apple to try to address privacy and safety concerns. iPhones warn users if an unknown AirTag has moved with them nearby, but Android users were left without such notifications, until recently. Various third party developers have offered solutions for detecting nearby AirTags, but Apple finally released its own app on the Google Play Store for that purpose in December. 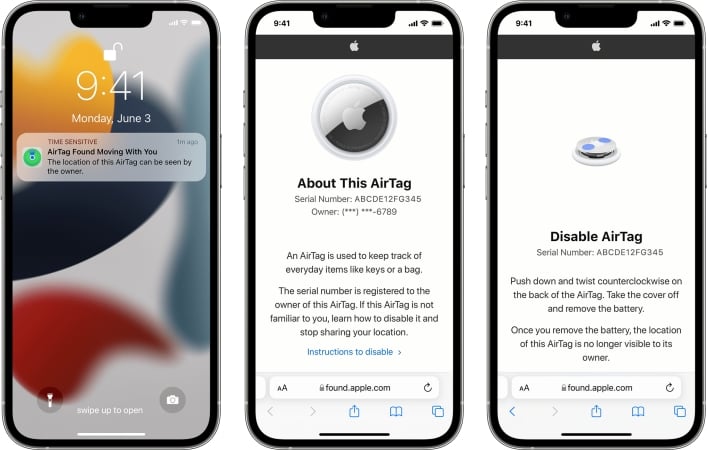 Apple is now taking additional steps to address unwanted AirTag tracking. The company stated in a press release that it has “become aware that individuals can receive unwanted tracking alerts for benign reasons, such as when borrowing someone’s keys with an AirTag attached, or when traveling in a car with a family member’s AirPods left inside. We also have seen reports of bad actors attempting to misuse AirTag for malicious or criminal purposes.”

Apple says that users have been receiving “Unknown Accessory Detected” alerts when near certain AirPod models, so the company will soon be releasing a software update that changes these alerts to indicate that AirPods have been detected. This upcoming software update also adds a message that AirTag users will see on first setup, making clear that AirTags should be used to track their own possessions and that using them to track people without their consent is a crime.

Apple says that it has been cooperating with law enforcement by providing the account details of iPhones paired with AirTags used for tracking people. The company says that law enforcement has been able to use this information to trace AirTags back to perpetrators, who have then been apprehended and charged.

Apple has additionally updated the unwanted tracking support article on its website with more detailed information regarding AirTag safety features, unwanted tracking alerts, what to do if users receive such alerts, and how to disable AirTags and other Find My network devices. The company is also working on some additional safety features for a series of planned updates. These features include a precision finding tool, phone alerts when AirTags automatically emit sound, refined unwanted tracking alert logic, and louder AirTag sound tones. You can read Apple’s press release to learn more.